"A Tribute to Billy Graham" by Dr. Garth M. Rosell

A Tribute to Billy Graham 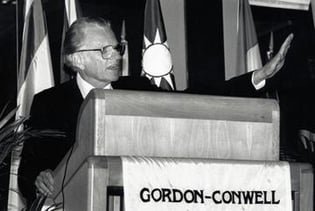 owerful but lived modestly in his rustic Black Mountain home.

Like John Wesley before him, he made the entire world his parish. Billy Graham "will go down in history,"1 Martin Marty has suggested, "as the best known, most traveled, most influential, and in many ways most representative evangelical Protestant" in recent history. Dozens of new ministry initiatives and organizational structures, from Christianity Today and The Hour of Decision to The Billy Graham Pavilion at the New York World's Fair, have been inspired by his vision; scores of books and articles have flowed from his pen; numerous world leaders have sought his advice; major conferences and congresses, from Berlin and Lausanne to Amsterdam, have been held under his auspices; and (what is perhaps of greatest significance) hundreds of thousands of men, women, boys and girls have responded to the gospel invitation he has extended so faithfully at the close of every service.

Those of us who are part of the Gordon-Conwell Theological Seminary community have been especially blessed by his life and ministry. Not only was he one of our principal founders but also he served faithfully for many years on our Board of Trustees and spoke at many of our most important gatherings.

"I have read," wrote Billy Graham at the end of his autobiography, Just As I Am, "that Johann Sebastian Bach ended each composition with these words: Soli Deo Gloria–'To God alone be the glory.' Those are my words as well, at the end of this project." One could hardly find a more appropriate epitaph to characterize the life and work of one of the true giants of our time.